Til The Boys Come Home 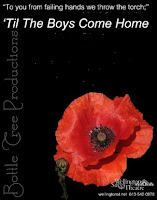 Our November production is a production of Charles Robertson's play; 'Til The Boys Come Home' which is a look at the dark clouds hanging over small town Canada when war is declared in 1939. The play follows the lives of teenaged boys and girls who are affected by the ultimate dramatic conflict. The story is told in six scenes by the ensemble cast. There is music, dance, and warfare to go with the acting. It is easy to think with teenage actors that they are age inappropriate, too young to play the parts of soldiers and young working women, as Hollywood tends to use older established stars to play the parts of soldiers. But many young Canadians gave their lives before they had even started living, before they had a chance to get married, have kids and careers. I suppose that with death as the ultimate event in everyone's lives, glory on the battlefield allows one to choose their last act. Today most of the veterans who survived the war have gone on to join their comrades, to renew acquaintances in the Elysian Fields. The play will take place at The Wellington Street Theatre in Kingston Ontario, which has a military base; CFB Kingston and The Royal Military College for Officer training. Kingston also is the home of Fort Frontenac which was a French military base set up in the late 1600's and Fort Henry which was built in the 1800's as a response to the growing threat of American military might, and was used in the Second World War as a prisoner-of-war camp. The play will take place during Remembrance day week from November 9th-15th, a particularly poignant time, with Canada's young men and women serving now in Afghanistan. Whatever one's opinions on today's wars or wars gone by, the one constant is the extreme sacrifice so many young people make in serving their country. They are willing to pay the highest price.

You can purchase the play on Amazon.com

Posted by Anne Marie Mortensen at 7:59 AM