But Where's the Art? - Commenting on 'The Soloist' 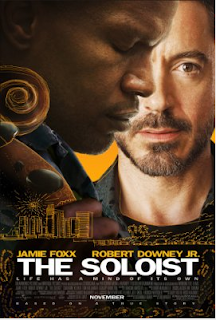 Last week, I rented a movie to watch while waiting for the theatre to clear out so that I could go home.

There was a poster on display for what looked like a great film; The Soloist, starring Robert Downey Jr. and Jamie Foxx.

It is the real-life story of a music prodigy, a cellist named Nathaniel Anthony Ayers (Foxx), and his relationship with a newspaper reporter, Steve Lopez (Downey). Lopez discovers Ayers as an adult, a homeless schizophrenic who plays an old two-stringed violin, and claims to have been schooled in classical music at Julliard. Lopez sees a story in this homeless man, and their unlikely friendship begins.

Lopez uses his L.A. Times column, Points West, to highlight the mentally ill musician, and eventually, to try to give the artist a second chance at a life off of the streets, performing. What he finds is that, while the streets are a problem, taking Mr. Ayers off of the streets is not the cure. Mr. Ayers is not ill because of homelessness; he is homeless because he is ill.

So we have the elements of a fabulous movie; top-notch, talented actors, a highly compelling story, limitless opportunities for conflict and pathos, brilliant music (Bach, anyone?), and a gritty urban backdrop.

The stars of the movie gave restrained, dignified, brilliant performances. There were some sparkling moments from minor characters during the interviews that Lopez had with in the shelter where Ayers kept his gifted cello. I wanted to see much more of them.

In a show about a classical musician, I expected a soaring score and was disappointed there. The cello solos that underscored the movie were probably meant to represent the illness, but they were relentlessly dark, and used in a heavy-handed manner.

The cinematic choices were also heavy-handed. "That is what you call a Kodak Moment," I was told, as two pigeons flew straight up with the diminishing rooftops of LA behind them. It was not the only cheesy shot in the film, which went back and forth as a visual depiction of the rough streets of LA and a flight of fancy and idyllic memories. Maybe I just learned more about schizophrenia, and that is more representative of the illness. My usual method is to try to get lost in the story. It was a conceit that I could have done without, and I think that the movie would have been better off without those moments.

Unfortunately, the treatment of the story was so uneven that a documentary would have been a better choice. It seemed as though the director could not decide between having an 'important' film, or an entertaining one, and failed to do either. Of course my recommendation, unsolicited as it is; please decide to entertain us. Yes, the plight of the homeless is terrible and needs a light shone on it, however, if the ultimate (hidden?) goal of the movie is to do that, then the film must be entertaining enough to develop a very large audience.

These are two real larger-than-life characters, and a larger-than-life story, brought down to a mundane level in a film that tried to be a message about homelessness and mental illness without looking like it was a message. The actors certainly delivered on their art. The art of the story was sacrificed on the altar of realism, while the art of the cinematographer was sacrificed to the gods of dramatic visual underscoring. Ultimately, it ended up looking like a feature-length commercial for Mr. Lopez' book about Mr. Ayers.

I don't know the reasons or pressures on director Joe Wright to make the choices that he has made, but he had the sensitivity to create a beautiful version of Pride and Prejudice, so I know it's in him. Maybe there were too many other voices to placate in this one.

Such a shame, because this is a story that an audience could really sink their emotional teeth into. We are prevented from doing so by a style of story-telling that turned out to feel like emotionless reporting.

Unfortunately, The Soloist is flat.

Posted by Anne Marie Mortensen at 11:12 AM