Ahh the world of non-professional theatre!

For those who are interested or curious to know what the heck is going on with Bottle Tree announcing Mamma Mia! and then Meistersingers posting a production of the same title in November - read on. If you don't care - stop here and congratulations.  :) 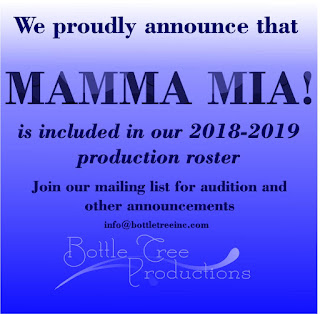 When I saw the title come available for amateur licensing, I applied within minutes. So did other companies. Amateur licenses for plays and musicals have no restrictions on them. Every single person in Kingston could have applied for the rights to perform Mamma Mia! and they would have all been granted - even if the productions were on the same dates.

Part of what we do at Bottle Tree is creating community (non-professional) theatre, especially large musicals. We think that this is important because it gives a professional level of support to people who love the art and may never get a chance to participate. I knew that Mamma Mia! would be a wildly popular title, and that it was likely that the Meistersingers would also have applied for the rights (and they had). I wanted to avoid the speculation that has happened in the past with productions that were done in the same year, by two companies, so I asked if they would like to do a co-production of the show with us.

Anyway - Liane and I talked and tried to figure out what might work and what might not work, and the timeline did not work out for us to work together. That is the short of it.

What people who do not produce don't really understand is that it is hard to book theatre space for shows in Kingston, especially on the big stage at the Grand Theatre. That theatre is booked at least 18 months in advance.  For me, the venue was very important. For Meistersingers, the number of possible performances was key.

I think that Meistersingers will do a good show.

I think that we will do a good show.

There is a bum for every seat. Mamma Mia! is a great title.  Stay tuned for Bottle Tree Productions'  audition and performance run announcement.

An eloquent response to an all too familiar situation. I agree, the more theatre we have to enjoy, the more we create an audience for each other.