Acting Out Loud Workshop at The Wellington Street Theatre

At Bottle Tree Productions we are excited to have Tony Babcock run a two-day workshop at The Wellington Street Theatre Saturday and Sunday on December 4th and the 5th. Both days begin at 12 noon and end at 6 pm. Tony is a high-energy guy who has tremendous drive, and a tremendous work ethic. He is the epitome of an actor that will make work for himself, the kind of guy that agents love. Tony has been in commercials, on Much Music, done voice-overs for games and been involved in theatre in Toronto. 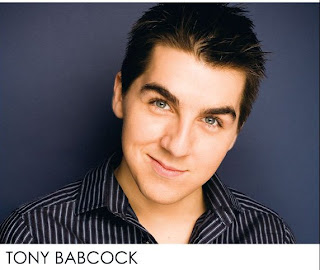 Tony started taking acting classes with me when he was eight years old, and he loved being on the stage. He would always check out the audience to see if they were enjoying his performance. When he was older, in his late teens, I gave him the part of Bottom in A Midsummer Night's Dream. I gave him free reign to improv and he didn't disappoint. He was hilarious. Tony always wanted more parts much like Shakespeare's Bottom.

I remember dropping Tony off in Toronto for an audition in his rented tuxedo. The tuxedo was called for. At the time he looked very small and lonely. Fast forward a few years and Tony is gainfully employed in the biz. He never lets a moment go by that he isn't actively involved in furthering his career. He designs websites for fellow actors as well as running workshops. He doesn't let the grass grow under his feet.

If anyone wanted to know what it takes to succeed in Toronto, then Tony's drive and energy would be a good template.

His new acting workshops titled 'Acting Out Loud' is being offered at a fifty per cent discount in Kingston as he beta tests his new program. For only $100, students get acting help and advice from a great guy. Tony has taught across North America so the weeekend of December 4th and 5 th promises to be a treat for the local acting community. Tony's humour and energy has got him through some tough times in Toronto, and his experience can only help others.