Mahi Raptis back in Kingston 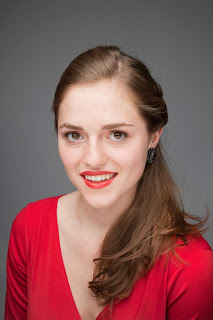 Anne Marie Mortensen and Charles Robertson first saw Mahi in Urinetown at KCVI and she was captivating. The following year they had the pleasure of working with her in Bottle Tree Productions' The Pirates of Penzance by Gilbert and Sullivan.

Mahi is beginning her final year of a Bachelor of Music in Voice Performance at the University of Toronto, under the tutelage of Professor Lorna MacDonald. This summer Andromahi attended the world renowned Franz-Schubert-Institut in Vienna, Austria for an intensive five weeks devoted to German Lieder. In 2011 she was a National Finalist at the Canadian Music Competition and won the Provincial Finals of the Kiwanis Music Festival. In August of 2011, she sang the role of Ilia in Summer Opera Lyric Theatre’s production of Idomeneo. For Opera Atelier, Andromahi has sung in the chorus of both Don Giovanni and La clemenza di Tito, which starred Measha Brueggergosman. Andromahi’s choral experience began with the Cantabile Choirs of Kingston in 2001, and since has taken her to the stage of Roy Thompson Hall with the Toronto Symphony Orchestra under the baton of Helmuth Rilling. For more on Mahi see  Greg Burliuk's article in The Whig Standard

Galalujah is a fundraiser for Bottle Tree Productions' The Sound of Music and the St Andrews Music Fund.

The evening kicks off at 7:00 PM -
with Hors d'Oeuvres & cash bar (mocktails and soft drinks)
There is a Silent Auction throughout the evening
At 8:00 PM The Musical Gala begins

For more about Andromahi, please go to Mahi Raptis

Anne Marie and Charles are pleased to welcome Andromahi back to Kingston and invite you to come an enjoy the talent of this exceptional young woman.

Posted by Anne Marie Mortensen at 5:59 AM