The Wellington Street Theatre Project is partnering with Sydenham Street United Church in Kingston, Ontario, to present Beauty and the Beast for one performance only Wednesday, July 27th at 2 pm. Tickets are $12/person and are available online at www.wellingtonst.net and www.bottletreeinc.com. Tickets can also be purchased at the door.

Beauty and the Beast was originally popularized by French writer; Charles Perrault in 1697 in a collection of stories in 'Tales of Mother Goose'.

The story concerns a merchant who loses everything to his unscrupulous partners. On his way home, a great storm drives him to seek shelter in a magnificent castle. Unknown to the merchant, a fearsome beast lurks in the castle. The Beast, who is really a handsome prince, has been placed under a spell by a jealous witch. The Beast threatens to kill the merchant unless he sends his youngest daughter to live with him. Unhappily the merchant agrees to this terrible bargain.

Beauty is frightened but for the sake of her father, she agrees to go live with the Beast. The story is a wonderful example of transformation, both for the Beast and for Beauty.

Lots of comedy, magic and music. Fun for the whole family!

This stage version has been adapted by Charles Robertson with delightful music and lyrics by Michael K Myers. 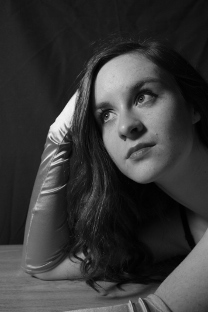 Megan Ready-Walters (Grease, This is a Play, Cinderella, Sweeney Todd) stars as Beauty.

Posted by Anne Marie Mortensen at 8:46 AM