This is an informative (if incomplete) list of superstitions associated with theatre. Until you are told about the do's and dont's of theatre, you run the risk of jinxing yourself or an entire production.


1)Don't say the name of this play. It rhymes with MacDeath. *coughAllisoncough* 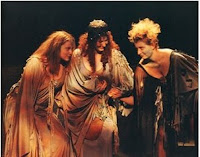 The most serious superstition is that you are not allowed to say the name of the play that Shakespeare wrote that involved all those Scots and the fighting. You know, it's the one that gave us the phrase 'Lead on, MacDuff'.
From now on, you will only refer to it as 'The Scottish Play', or 'the Bard's play'.

The repurcussions of uttering this name inside a theatre are huge, and come in threes. The curse on this name is so strong that real theatre people won't say it under any circumstances, except during the performance of the play, while saying their lines. Not anywhere. Not anyhow.

If you have done the unthinkable and spake that name in a theatre, you must immediately go outside, spit, swear, turn around three times, and beg permission to be allowed back inside.

Some sources say that this play is unlucky because it was traditionally used as a last-ditch effort to sell seats to patrons. If a theatre company was having a bad year, they would perform this show, thinking that it was a 'sure thing'. So the performance of the play became associated with a theatre company in financial crisis. 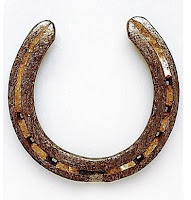 Many superstitions go toward the tendancy of people to want to feel comfortable and prepared. Part of what makes actors good is a feeling of not-quite-being-ready. So if they are comfortable and believe that now it's up to fate (luck) their performance will suffer.

Wishing them 'break a leg' is a way not to jinx the performer because it reminds them in a backhanded way that something bad can always happen, and it's also a term used for bending a knee in a bow. So they have to earn the right to break a leg. Convoluted, innit?

Also, theatre folk are aware of spirits, both good and bad, and sprites in particular are oppositional, so if they hear you wishing for something, they are likely to try to deliver the opposite.


3) Whistling inside a theatre is bad luck. 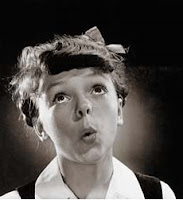 Back when sandbags were used to counterbalance heavy curtains, and flys, a whistle from below would indicate the 'all clear' and be the stage manager's signal for the crew in the catwalks to let the bags or scenery drop.That can get you killed.


4) Mirrors, and real jewelry on stage are bad luck. 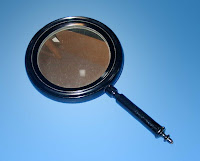 Stage lighting is intense, and a mirror or shiny jewels can reflect light in ways that the lighting designer did not intend - like into the eyes of an oncoming or outgoing actor, causing them to fall... you get the picture!

Also, mirrors can break, and broken mirrors are seven year's bad luck, and theft is a real problem in theatre, where all eyes are on stage. There is opportunity for unscrupulous people to nick a necklace!


5) Peacock feathers in a theatre and on stage are bad luck.

For theatre-folk, those peacock feathers represent the evil eye.

In greek mythology, Argus had a hundred eyes, and was given the task to watch over Hera's priestess, Io, when she had been transformed. Argus was slain by Hermes, but his eyes were transferred to the tail of a peacock. Bad luck to be slain. Bad bad luck.


6) A light should always be left burning downstage centre.

This 'ghost light' is important to keep ghosts from inhabiting the place. It also allows people who are the last out and the first in to see if there is anything on stage that could cause them injury. Sets, props, costumes... you can't see them in the dark!

7) A bad dress rehearsal is a good omen for opening night. 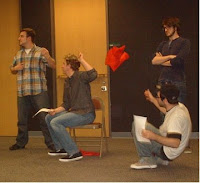 The idea is that if the dress rehearsal is bad, then the next performance (opening night!) will be good. All of the bad vibes will have been used up, and the actors and crew will be on high alert because they will not want a repeat of the previous night's show.


8) Cats are lucky... but sometimes not, depending on what you believe.

Cats are considered to be magical creatures in many traditions, not the least of which, in theatre, where they serve as useful members of the crew. Cats keep down vermin which ruin costumes and props and they are attuned to 'otherworldly' happenings.

Cats crossing a lit stage, on the other hand, foreshadowed bad luck. as they were more comfortable being in the semi-darkness offstage.

There is an opposite reading for that as well, that being that cats on stage are always lucky, because if they are present and content then all is well in the supernatural world.


9) The colour blue is unlucky.

Many superstitions of theatre are connected to finances. Blue used to be a very expensive colour to reproduce, so any theatre company who used blue fabrics or paints was spending a lot of money that it needn't spend. Never in history have theatre people been terribly well-off, so it was (and is) very important to be conservative in costuming and decorating a set. Blue things meant that the company was spending a lot, (usually in an attemtpt to show off, therefore gambling that the audience would show up) and would likely go bankrupt.

However, if silver is added to the blue (like a silver threading or silver ornament) the bad luck is lifted, as this meant that there was a wealthy backer who could afford to pay for the show.

Again, you don't want to incur the wrath of the sprites, who want to turn everything on its ear. Presenting flowers to an actor before the show is a little too cocky for those sprites, and they will see to it that bad things happen during the performance.

Wait until the curtain falls, then send the bouquet backstage, that way, you are not jinxing the performance.


11) Candles should never come in threes. 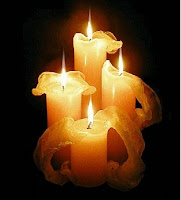 Paint, costumes, poor lighting, busy people, and OPEN FLAME are not usually a good combination. Before the electric light, candles were de rigeur for lighting a room. HOwever, a combination of three candles was considered bad. The person nearest to the shortest candle was either going to be the next to die, or the next to marry. OUCH!

12) The last line of a play should never be spoken until opening night. 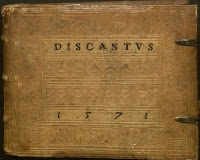 Theatre is not complete without an audience, so to prevent disaster, the last line is not uttered until an audience is in the house.


13) The first audience member to enter the house must have a paid ticket.

Like any business, theatre is about making money. It is a bad omen to start off a show with an 'empty' cashbox. Many house managers will ask comp ticket holders to please wait to be seated, until a paying customer has entered the house.