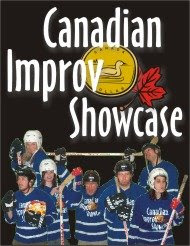 The Wellington Street Theatre is pleased to be hosting the Canadian Improv Games from Toronto, on May 7th-9th at 8 p.m. Tickets are $20/adults and $15/seniors & students.
They are a family-friendly improv group that shies away from inappropriate language which is refreshing in this day and age. One of the members of this troupe is from the Odessa area. Tony Babcock is an extraordinarily funny performer, who can change characters as fast as Robin Williams. Tony and Krock radio host Sideshow, who is also very funny, used to perform their shtick together, when they were younger. Tony has performed for Theatre 5, Domino Theatre, Bottle Tree Productions and Slackwood Players in Selby. With good friend Jacqueline Luney, Tony created Recensio, a story of light and dark, a multi-media production, that was very funny and moving. Anybody who has ever come in contact with Tony has to be impressed with his drive and his talent. He has done t.v. and film while in Toronto, while keeping his comedy skills sharp with The Canadian Improv Showcase. He can turn a phrase in any era, having excelled as Bottomg in A Midsummer Night's Dream, Algernon in Oscar Wilde's The Importance of Being Earnest, and eight different characters in Christopher Marlowe's Doctor Faustus. I have a script in front of me with Tony's name on it for a drama class production of The Titantic. It has Tony's name scrawled across it. He was eight years old. It will be good to see him again.